Does this apply to you?

If it does, it could be costing you a lot! 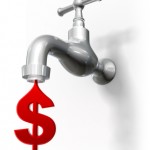 You will recall a survey I recentlly discussed which found that 88% of the businesses surveyed knew they had a profit leak.  Of these, nearly one-third had no idea where the leak was and so were not doing anything about it.  Estimates of the amount being lost ranged from less than 10% to up to 20%

Looking at the results more specifically, lost sales opportunities, poor project profitability, and low staff utilisation were all among the top areas of profit loss, but some 32% of respondents had no idea where the leaks were occurring.

Of those surveyed, 63% believed that the percentage of profits leaking could be anywhere between 0% - 20%.  At the upper end of the scale that is a lot of money.  It would have a deleterious impact on your bank balance.

I say ‘your bank balance’ because I’m sure there is a question in your mind as to whether this applies to you.  After all the companies surveyed were largely not small businesses, and they were UK based.

Based on my experience I think they do.

Some years ago I summarised my findings from all the small businesses I had reviewed, diagnosed, and helped improve their business; helping them find and plug their profit leaks.

Where did those profit leaks occur? There were three main areas:

Sales and marketing – most were very bad at marketing. They had no formal or planned marketing strategy and had no sales training. This is not surprising, as they had usually established their business on their technical or trades skills.

They rarely had information on the sales and, more importantly, profitability of their key market segments, or the products and services sold to those groups. Nor did they have information on their promotional programs – the leads generated, the conversions from those leads, the cost per customer acquisition; what works and what doesn’t.

Operations – despite those technical skills there were often profit leaks on individual jobs or projects, or in specific aspects of their business. The case study on the Profits Leak Detective home page is a typical example of a business that did its jobs well, but lost money on many. There have been many other such examples.

Again, the underlying problem has always been lack of management information on what was happening operationally. Once the information was available the solution was obvious.

Administration – unlike the Access survey, finance has rarely been a problem. Small businesses tend to be run as a fairly right ship. But the administrative systems and procedures to support the business were rarely available.

Equally rare were Management Information Systems (MIS) to provide the week-to-week and end of month information and reporting necessary to run the business. Regular reporting and review was noticeable by its scarcity.

Those Access Group findings are likely to apply to you. There is a pretty good chance that you have a profit leak, and that you may not know where it is coming from, or how significant it is.

The solution is simple, as the Access Group suggests: have the right information available, and the reporting tools to ensure it is not just available, but is utilised. Then you will have no need of excuses, and be much more profitable.

When clients approach me for coaching, clients with businesses that are underperforming despite the crippling hours and effort the owner is putting into them, it is not just marketing that is holding them back.  It is the lack of control they have over their business, and eight times out of ten that lack of control comes down to a lack of knowledge of what is happening in the business.

For more than 28 years I’ve been helping small business owners plug the profit leaks in their business, giving them back control of their business, and restoring their cash.

If you would like to discuss with me how you might do that, book a Strategy Consult here.

CLICK HERE - NOW
And receive your Free Gift – Valued at $54

Subscribe now and get regular
proven profit leak plugging tips,
gift…
(NOTE: we'll send an email with a link for instantly downloading our gift so make sure you enter your email correctly!)


Some profit losses are pretty obvious - so you fix them.
BUT, what if you don't know profits are leaking, cash out the door?
Possible leaks could be anywhere.
Are there some clues or symptoms that are tell-tales?

No thanks, go to the
Profits Leak Detective site